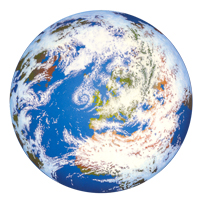 The Earth on which we live was formed about 4.6 billion years ago, from matter produced by exploding stars. This matter, in the form of hot gases eventually solidified into a sphere of molten minerals which in turn cooled at the surface to form the crust upon which we live.

This relatively thin outer crust contains the primeval fire which is still very active to this day. These very powerful forces are still capable of causing immense damage to the fragile surface of our planet when this energy is violently released in volcanic eruptions and earthquakes.